Blokesworld is what happens when a couple of Aussie blokes from outside the TV industry ignore all the rules and make their own show anyway.

Ado and Camera 3 travel around Australia and the world finding blokes doing the things that blokes do. It’s about motor racing in all of it’s forms, cars, bikes, trucks, shooting, fishing, barbecuing, and having adventures.

Most episodes are a day in the life of the grass-roots tribes we find around the world doing the things that blokes love doing. It’s un-polished, un-scripted, and a heap of fun.

2018 so far has been all about the gas, starting with a frantic and dangerous dirtbike tour through northern Thailand with a bunch of mates. Later in the year we’ll head to Vietnam for another, more relaxed dirtbike tour.

But we’ve also become hopelessly addicted to racing on four wheels, building a racecar out of an EF Falcon station wagon and running it in the 24 Hours of Lemons and Lakeside Raceway’s Notta Grand Prix.

And the highlight of my life so far (Camera 3 here) – we went to Laguna Seca raceway in California to learn how to drive Formula cars at Allen Berg’s Racing Schools.

Ado and Camera 3 tick off a dozen bucket list items each as they travel through the South of the USA on the Blokesworld NASCAR Road Trip! Along the way, we still bring you plenty of Aussie action from back home.

And stay tuned for some motocross enduro turmoil later in the year as the boys travel to Austria for the Erzbergrodeo, Belgium for some insane hill climbing, North Queensland for lawnmower racing, and a stack more.

At the same level of crazy we also got to a couple of rounds of the v8 Jetboats. And to round it off, the boys went to Tokyo to see what Japanese blokes get up to. 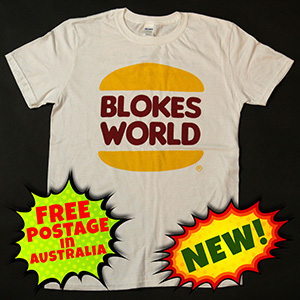